skip to main | skip to sidebar

To all the security guards...

As an urban plein air painter I have frequent encounters with the security sector. Two days ago I was turfed from a prime spot by an older gentleman of authority. Unlike my earlier days, I don't argue (much, anyway), and move on if I must. There is no point challenging them, cajoling with them, they're just doing their job, so why make them miserable? They're really in no position to cut you slack. In the fall I was painting in Windsor and had my mind set on a location along the Detroit River, a locale that produced successful work in the past. My 'secret spot' was at the end of a long deserted gravel road. Not another soul in sight, right? Nope. A woman jumps out of a van as I'm unloading the gear and tells me to pack up and move on, this area was no longer accessible to the public. After my initial shock and disappointment faded, I was disturbed by how vulnerable this woman was out here, miles away from anyone and alone. The last thing I was going to do was give her a hard time.
So, just an opportunity to give props to those often-maligned security workers. 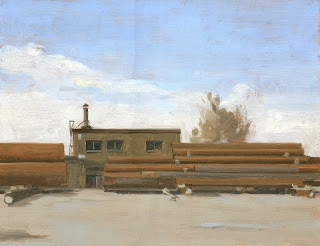 jerrycampbell
I'm an urban plein air painter based in Toronto.